Salmon holds a place of honor at all tribal feasts.

One of the Plateau tribes’ most important ceremonies is the First Salmon Feast. This salmon ceremony must occur before open fishing can take place. It is why every fishing season begins with a ceremonial harvest for fishers to catch salmon for use in these ceremonies. The timing of these feasts matches the arrival of the salmon to each longhouse. The feasts move upriver with the fish.

A tribal myth tells that when the Creator was preparing to bring forth people onto the earth, he called a grand council of all the animals and plants. He asked each for a gift for these new creatures – a gift to help the new humans survive, since they would be quite helpless and require much assistance.

In accordance with their sacrifice, these two receive a place of honor at traditional feasts throughout the Columbia Basin. These ceremonies always begin with a blessing on and the drinking of water, followed by a prayer of thanksgiving on and the serving of the salmon. This ceremony reinforces the central role that salmon and water play in the health and culture of the tribal people in the Columbia Basin.

The First Salmon Feast is part of the traditional tribal religion of the Columbia Basin. Known by various names including Washut, Longhouse, and Seven Drums, this religion continues to guide tribal people and connect them with the Creator and the gifts He has given them. It also connects followers to the land and to the culture practiced by their ancestors. Below is a description of a First Salmon Feast held to celebrate the return of the salmon:

Upon entering the longhouse, the women go to the south side and the men to the north. Each forms a circle, standing shoulder-to-shoulder. Drummers begin a series of prayer songs. To their right, the longhouse leader holds a brass bell, ringing it and using it to count the song sequences. During the service, Washut members sing, dance, or move with small dignified steps. Some of the songs thank the salmon for giving its life to feed the people while others remind those gathered of the traditional laws that must be observed.

“When the Creator created our Mother Earth, He gave it life,” explains the longhouse leader. “When the dawn comes on this sacred day, the light of our Father is here. This life is a sacred inherent right of our people. These songs speak of this life from the time that life began. We’ve always been alongside the animals, the trees, the grass, and all the roots that make the medicines and foods.” The leader reminds everyone that tribal people hold all these in great reverence, “because they too have a purpose – to nourish and strengthen our hearts, our minds, and our bodies.”

While the songs are still being sung, food servers bring out the food and set it in front of those assembled. The young men serve the “brothers” of salmon, deer, and other meats. The young women serve the “sisters” of the huckleberries, roots, and breads. Before the meal is eaten, the bell is rung as a signal for everyone to stand and join in a prayer song. The bell rings again, followed by the leader calling out “choosh,” which means water in Sahaptin (the language family common to the four tribes). This is the sign for the participants to pick up their cups of water and drink. After the drink of water, the meal is eaten.

When everyone has eaten his or her fill, a closing song is sung and a final call of choosh signals all to take one last drink of water.

Words of our Elders

Elders teach the younger people that the salmon, deer and elk are our brothers and the roots and berries are our sisters and we should treat them as such—with respect and caring for them,”

The Food is Blessed 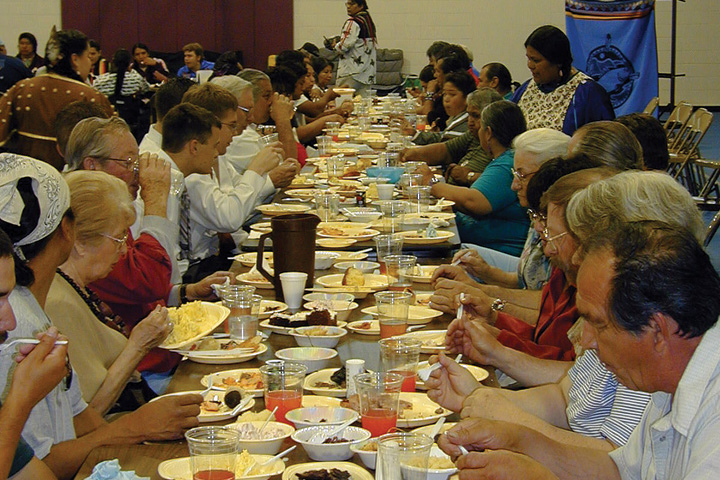 After the blessings, the foods, beginning and ending with water, are honored and eaten. The solemn occasion of the service gives way to a festive occasion to enjoy the company of those seated together. 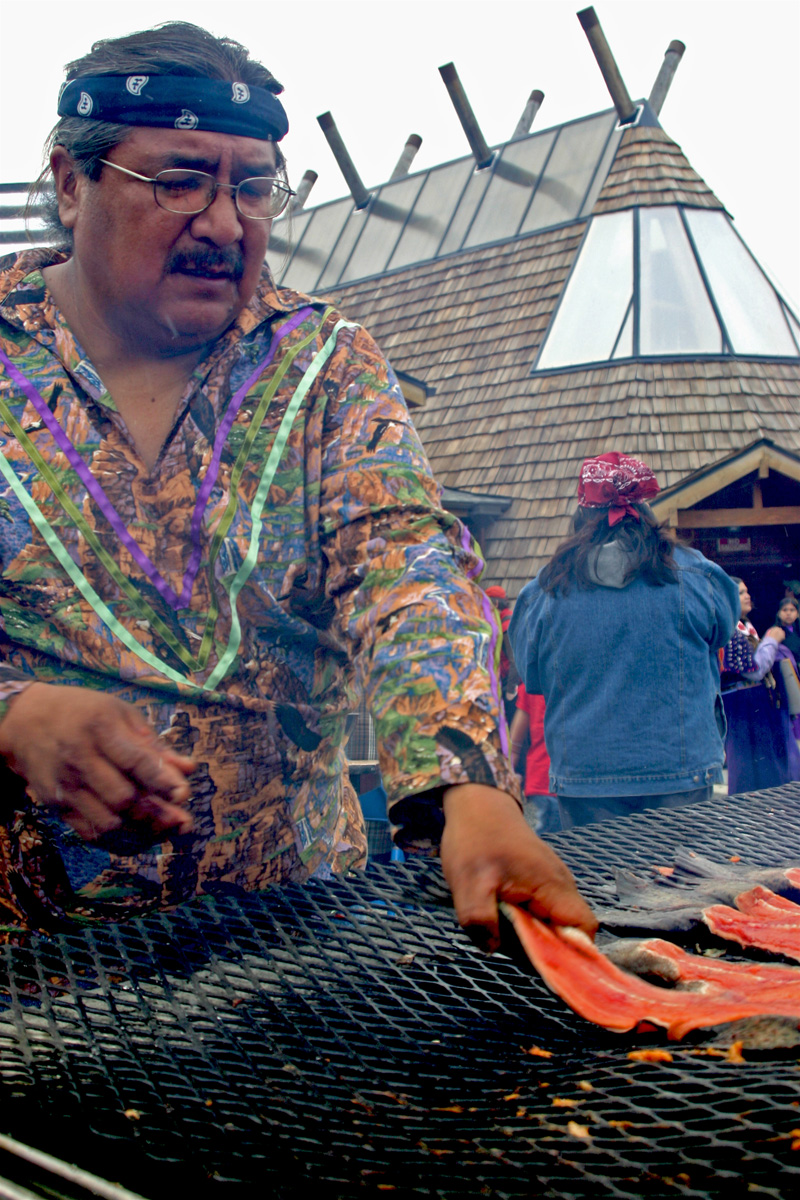 Grilling salmon to be served at the Celilo Longhouse at the 50th anniversary commemoration of the flooding of Celilo Falls in 2007. Almost all tribal ceremonies, celebrations, funerals, and other special events include salmon. 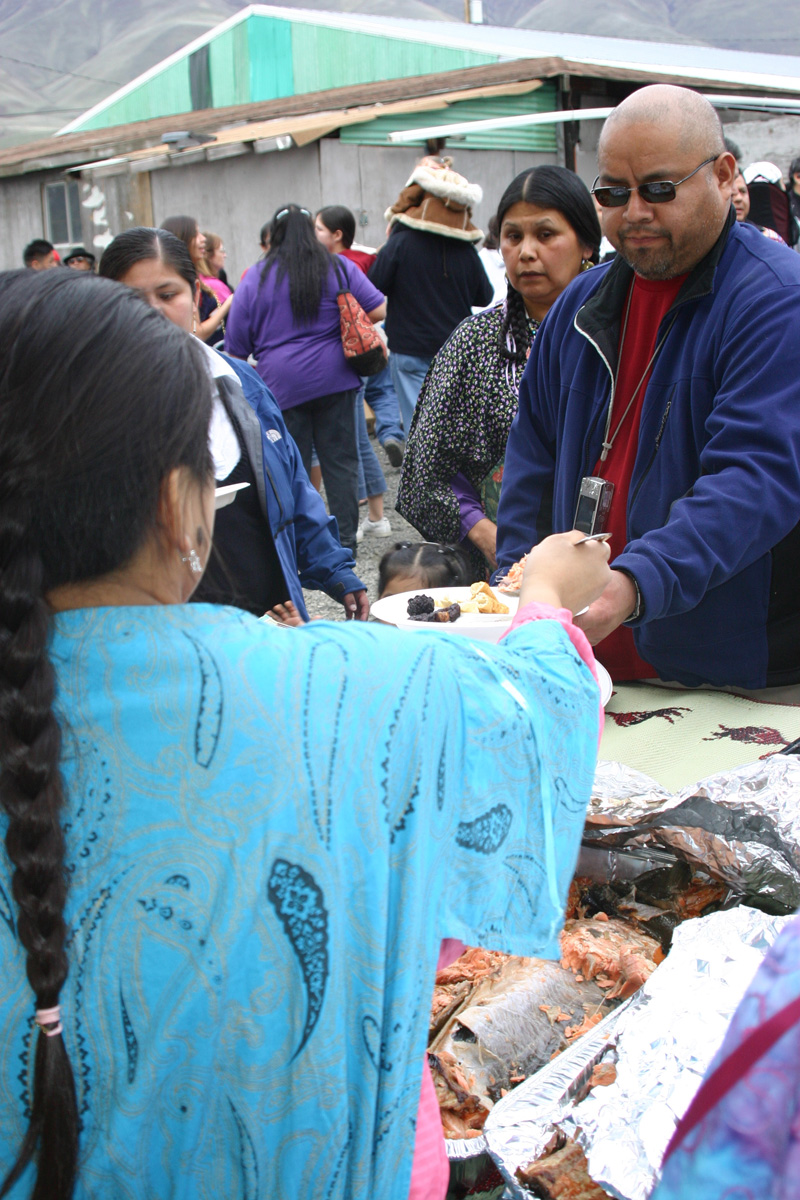 The Celilo Longhouse First Salmon Feast is generally on the second weekend in April. The public is welcome to attend the event and take part in this ancient tradition.