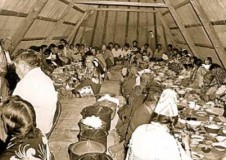 Columbia River people have gathered for thousands of years to celebrate the return of the salmon.

The first salmon is making its way up the Columbia River, following the call that the Creator placed in it and its brothers and sisters to return home to renew life. As Indian people, the first salmon is the sign that we made it through the winter and that these sacred fish have returned to nourish and sustain us another year. Soon, fishers will begin the ceremonial fishery, working to supply the longhouses and churches with enough fish to serve their needs to celebrate the First Salmon feast. These salmon are at the center of our traditional culture, religion, and way of life. Because of this, the ceremonial fishers are selected and honored for this important role. Because of this, the fishers are allowed to go out on the river first. Finally, because of this, the rest of the fishery waits until the longhouses and churches have enough fish to provide for the feasts and ceremonies that define us as Indian people.

Each year, the Yakama, Umatilla, Warm Springs and Nez Perce tribes engage in ceremonial fisheries. The tribes seek to ensure that spring chinook are available for longhouses and churches for the spring ceremonies as well as for other ceremonial needs throughout the year. In years of higher abundance, there is a desire to finish Columbia River people have gathered for thousands of years to celebrate the return of the salmon. the center of our way of life—remains a part of the religious and traditional feasts and services that make us Indian. All too often, our beliefs and culture have faced threats from modern times. But the salmon have given us strength to carry on and to connect us with our ancestors as well as our children and our children’s children.

To all the ceremonial fishers preparing for the harvest, I wish you good luck. You are carrying on a tradition tens of thousands of years old and handed down to us by the Creator. Your efforts allow us all to take part in this sacred First Salmon ceremony that ties us to the salmon in the most important and spiritual way. Thank you.