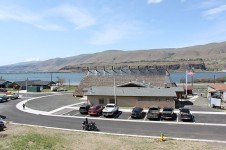 On November 2, the US Army Corps of Engineers hosted a meeting at the Discovery Center in The Dalles. The meeting was in response to the tribes’ request that the Corps conduct a study of tribal housing and infrastructure needs along the Columbia River. The meeting focused on the lessons learned from Celilo Village re-development and is the initial stage in the Corps fact-finding study. Tribal government officials, housing staff, and members of the tribal communities along the river attended the meeting along with representatives of the Corps and Cooper-Zeitz Engineers—the contractor conducting the fact-finding study for the Corps. The tribes are in the process of forming an intertribal housing committee to interact with the Corps and address other housing matters along the Columbia River. CRITFC has set up a Twitter feed at @riverhousing to inform interested tribal members of upcoming meetings. For those without a Twitter account or who would like the announcements also sent to their cell phone as a text message, send a text message containing the phrase “follow riverhousing” to 40404 to sign up.