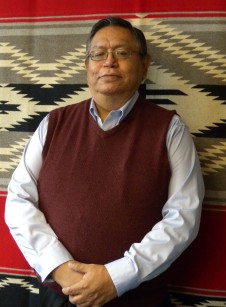 Citing medical reasons, Davis Washines (Yellowash) has decided to retire in August 2013 as Chief of Police from the Columbia River Fisheries Enforcement Department, a position that he has held since March 8, 2010.

“One of the best things to happen to me in my life is to lead CRITFE, an opportunity and privilege for which I will always be grateful,” said Chief Washines. “I have been fortunate to work with some of the best enforcement people in Indian Country and an honor to serve the tribal fishers and the tribal communities along the Columbia River.”

During his tenure, Chief Washines worked with CRITFC’s leadership to secure new enforcement commissions with the Bureau of Indian Affairs and restore enforcement commissions with the Yakama Nation. The tribal enforcement presence along the Columbia River was improved substantially with the new Bureau of Indian Affairs 638 contract for the in-lieu and treaty fishing access sites. CRITFC was also able to secure resources for a mobile command center.

Paul Lumley, CRITFC’s executive director stated, “Chief Washines was instrumental in the significant improvement in the relationships with tribal, federal and local jurisdictions. He will be missed as the senior officer of CRITFC’s enforcement department.”

Chief Washines has a combined 30 years in law enforcement that spans four decades. He began his career as a dispatcher/jailer for the Yakama Nation in 1973. A year later he was promoted to police officer and was the top graduate of his BIA Basic Police Academy class in 1975. He rose through the ranks, including seven years as a criminal investigator, becoming the Yakama Nation Chief of Police in 1986, a position he held until 1996. A second appointment as Yakama Nation Police Chief came in 2005.

Chief Washines hopes to remain engaged in addressing tribal fishery and justice needs. He stated, “Although I’m retiring as the Chief of Enforcement, I look forward to find ways that I can continue to support and protect the tribes’ treaty fishing rights along the Columbia.”