Welcoming back the “Little Salmon”

Much smaller than their chinook cousins, these two bright red coho salmon return to Lapwai Creek to spawn.

Since ancient time, the Nez Perce witnessed the return of Chinook, sockeye, coho, and steelhead to their waters. During the twentieth century, though, those numbers dwindled. The coho were hit hardest, driven to extinction in the Snake River Basin. Thanks to Nez Perce determination and dedication, the “little salmon” once again swim the waters of Nez Perce Country. Historically, coho salmon could be found throughout Nez Perce country in the Clearwater, Grande Ronde, and Salmon River subbasins. Nez Perce elder Elmer Crow, technical supervisor for the Nez Perce Fisheries Program, remembers waiting with his father for the coho to return to Idaho. “Coho—or little salmon as my dad would call them—would come back to Lapwai Creek, Potlatch Creek, Tucannon Creek,” Crow said while reminiscing about his fishing trips to these streams with his father. “He would always tell me that the little salmon would come.” 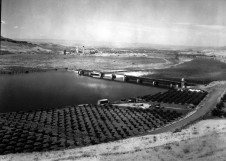 The Lewiston Dam shunted logs to the Potlatch Mill. The dam was removed in 1972 to make way for Lower Granite Dam’s reservoir which would have flooded it. Photo courtesy Nez Perce County Historical Society, Lewiston, Idaho. Photo 86-43-17.

The construction of the Harpster Dam in 1910 on the lower South Fork of the Clearwater River and then the Lewiston Dam in 1927 on the mainstem of the Clearwater decimated coho returns. After the Idaho Department of Fish and Game’s coho reintroduction effort from 1962 until 1968 failed, coho salmon were declared extinct in the entire Snake River Basin in 1984. Ten years later, the Nez Perce Tribe began an intensive supplementation program to reintroduce and restore the ”little salmon” to the Clearwater River and the tribal community that depended on them. “No one can ignore the importance of coho salmon to the tribe and the river,” explained Jaime A. Pinkham, a Nez Perce Tribal Executive Committee member at the time of the project’s implementation. “The tribe’s supplementation program assures that coho will always be around.”

In 1994 the Nez Perce kick-started the return of coho in Idaho with the help of 800,000 eyed eggs from the Bonneville Hatchery that were destined for the local landfill. The Nez Perce Tribe entered the coho recovery business despite the threat of criminal prosecution by the State of Idaho for “illegally” outplanting fish and implementing a reintroduction effort without a management plan. After raising the eggs at the Sweetwater Springs Hatchery, the Nez Perce Tribe asserted its inherent sovereignty by actively reintroducing coho into the basin, “Our first release was 600,000 fingerlings into Lolo Creek,” explained Ed Larson, production manager for the Nez Perce Tribe. “We were the renegade Indians that were banned by the state from releasing these fingerlings without a plan.” Unwilling to forego the opportunity to reintroduce coho, the tribe maintained that the salmon management plan created under the U.S. v Oregon case and tribal sovereignty provided them with the authority to reintroduce coho despite the state’s objection. “At the time we were working to be as legal as possible,” Larson said. “We notified the state of our actions and were following protocols for rearing and fish health, yet the state still threatened prosecution under state law. So when it came time to release the juvenile coho, only tribal members were involved—putting any arrests under the jurisdiction of the tribal courts.” Since then, both the recovery methods and Idaho’s position on coho recovery have changed dramatically. Now the Nez Perce Tribe’s restoration effort is a collaboration between the tribe, U.S. Fish and Wildlife Service, and Idaho Department of Fish and Game. “We’ve seen this program grow from a level where 600,000 fingerlings were released that first year to a level where 1.1 million juvenile coho were released as part of this project,” explained Aaron Penney, Nez Perce Tribal Hatchery assistant manager. “When we release 1.1 million juvenile coho into the system we see between 5 and 15 thousand of those fish return to spawn,” Larson explained. “We collect about half of those returning adults at the hatchery; the other half spawn naturally somewhere else in the system.” “We’ve found that juvenile fish that have been acclimated before their release produce results that are four times better than their non-acclimated siblings,” Larson said. “They are more likely to survive the journey to the ocean and return to spawn as adults.” Funded by the Pacific Coastal Salmon Recovery Fund, the tribe’s recovery efforts have certainly paid off. Three years after the first controversial releases, 97 adult coho returned to the tributaries of the Clearwater and Snake rivers to spawn. Last year 3,904 adult coho made it back into the streams. “Approximately 20% of the fish returning above the Lower Granite Dam came from this project,” Larson said. Crow added, “We took a species that was extinct from this basin and brought them back.” 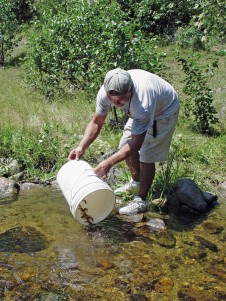 Despite the changes to the program over the past 15 years, the goal of the Nez Perce Tribe has not changed: have enough coho adults returning to the basin to support a tribal and non-tribal fishery. This vision that has been met with successes and obstacles. Cuts to the project’s funding have introduced a number of challenges and a feeling of uncertainty into the recovery effort; forcing the tribe to reduce the number of juvenile fish released back into the system and reducing the scope of the project’s evaluation activities. “Without the appropriate funding we have had to scale back the outplants from 1.1 million juveniles to 830,000,” Larson explained. “The monitoring and evaluation component of this project has been cut to the bare minimum: counting adults passing over Lower Granite Dam.” “Right now we are just trying to hang on to the program,” Crow said. “With these cuts, we are just barely hanging on. Hopefully with some of our proposals we can get back on track.” Salmon restoration is a carefully orchestrated balancing act. “Coho restoration is about science, habitat, litigation, court decisions, funding, appropriations, treaty rights, and a host of other issues that together facilitate the region’s salmon recovery efforts,” explained Larson. “You have to find a balance between all of them.”