A Second Time Around for Steelhead

Yakama, Nez Perce, and CRITFC staff gathered at Dworshak National Fish Hatchery in Orofino, Idaho to air spawn adult steelhead. This live spawning technique uses a small injection of compressed air into the female’s body cavity to press the eggs out without harming the fish.(Male fish are milked for their milt without being killed first.) This allows the spawned out adults to be reconditioned to improve their odds of survival. 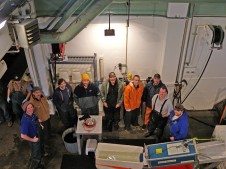 Tribal and CRITFC steelhead kelt teams at the Nez Perce hatchery at Dworshak.

Unlike other salmon species, about 10 to 15 percent of steelhead don’t die after spawning. These steelhead that survive after spawning are called “kelts.” They can swim back to sea and return to spawn again. CRITFC is working with the fisheries staffs from the Yakama Nation and Nez Perce Tribe to increase steelhead abundance in the Columbia Basin by reconditioning kelts so they can reproduce again.

CRITFC and tribal staff also collaborated on the article “Survival and Traits of Reconditioned Kelt Steelhead (Oncorhynchus mykiss) in the Yakima River, Washington” that was recently accepted for publication by the North American Journal of Fisheries Management.