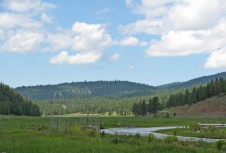 A protected creek system flows through the Warm Springs Tribe’s Forest Ranch Project. Fencing to keep cattle out of the creek was funded through the PCSRF. This Middle Fork of John Day River parcel provides spawning habitat for up to 60% of returning spring chinook.

NOAA Fisheries has awarded CRITFC $1.5 million for FY 2013 for the Pacific Coastal Salmon Recovery Fund (PCSRF), a $100,000 increase over last year. The CRITFC application was rated #2 of all of the applications submitted and #1 for all of the tribal applications. Congress established PCSRF in 2000 to provide grants to Pacific Northwest tribes and states to assist salmon conservation and recovery efforts. CRITFC signs a Memorandum of Understanding (MOU) with NOAA Fisheries each year to administer the PCSRF and assure that projects can be implemented efficiently. The CRITFC tribes’ participation in the PCSRF is directed by the principals of Wy-Kan-Ush-Mi Wa-Kish-Wit to provide fisheries benefits now and in the future. Since 2000, the treaty tribes and CRITFC have successfully implemented 279 projects under the PCSRF within the Columbia River Basin. Some major successes include restoring 1,580 miles of streams for salmon habitat, the tribal acquisition of over 15,500 acres, and removing 57 instream passage barriers. The majority of these projects involve collaboration with federal, state and private landowners. The PCSRF total funding amounts for all of the eligible entities have varied over the years from a high of $110 million to a low of $58 million. Each year a new application has to be submitted through a competitive process.

A Nez Perce Fisheries biologists outplanting coho smolts into the Clearwater River Basin. Thanks to the Nez Perce Tribe’s efforts, coho—once extinct in Idaho—are now returning to the state in harvestable numbers. The project is funded by PCSRF.

The tribal PCSRF projects represent only a small percentage of the total tribal salmon recovery efforts in the Columbia River Basin.