Speaking for the Ecosystem 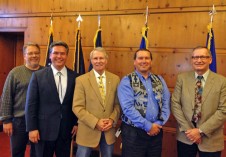 In 1964, after 14 years of studies and 6 years of negotiations, the United States and Canada implemented the Columbia River Treaty. The two nations agreed to manage the river system under this treaty only for flood control and hydropower production. The tribes weren’t involved in the technical studies or the negotiations and as a result, tribal interests were not included. The needs of salmon were ignored in the original treaty, which has complicated the tribes’ salmon restoration programs. With several endangered salmon populations, it’s clear that the experiment to ignore the shared nature of the basin ecosystem in the 1964 treaty has been a tremendous failure. Now the 50-year-old treaty is up for review. This provides the tribes and the region with an opportunity to renegotiate the treaty to include the river values of today, not the outdated values of the 1950s and 60s. This may be the best opportunity in our lifetime to change the flow of the river to be more natural, help juvenile salmon migrate to the ocean, and possibly even restoring salmon runs above Grand Coulee Dam into Canada. The federal government needs to step up for tribal treaty rights and protect our interests. That’s the supreme law of the land and the tribes intend to make sure that the federal government upholds the tribes’ treaties of 1855.