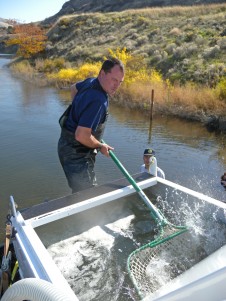 On October 17, tribal and CRITFC staff released 57 adult steelhead that had been successfully reconditioned as part of a CRITFC/Nez Perce research program. Through the program, post-spawn adult steelhead are trapped at Lower Granite Dam, transported to Dworshak National Fish Hatchery in Orofino, Idaho where they are reconditioned over a 5-month period, and then released to spawn a second time. By re-maturing them in a facility rather than losing them when they attempt another trip to the ocean and back, these fish can spawn over multiple years and aid in the recovery of wild steelhead populations in the Snake River.

Unlike salmon, steelhead don’t necessarily die after spawning. Around 2% of Columbia Basin steelhead successfully spawn twice. These repeat spawners are called “kelts.” Thousands try to migrate to the ocean after spawning but die before getting there. Limitations on downstream adult fish passage at the Columbia River hydroelectric dams pose serious barriers to outmigrating kelts. As a result, fewer kelts are found in the upper Columbia than elsewhere in the basin.

The tribes’ cutting edge genetic research at Hagerman laboratory identifies which tributaries are producing the most kelts. Research at the Parkdale Fish Facility suggests that kelts are just as reproductively viable as fish spawning the first time. This means that every kelt has the potential to be a valuable contributor to steelhead populations. 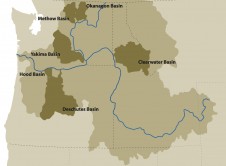 The tribes are conducting kelt reconditioning projects in subbasins throughout the Northwest.

To this day, the tribes remain the only fishery managers conducting steelhead kelt reconditioning research in the Columbia Basin. These programs have been successful in discovering which reconditioning strategies and methods work best at decreasing mortality after spawning. By collecting and reconditioning kelts the tribal programs are acquiring wild steelhead spawners from a group of fish that most likely would have died.

This project demonstrates the tribes’ commitment to Wy-Kan-Ush-Mi Wa-Kish-Wit—the Spirit of the Salmon restoration plan. The tribes’ plan calls for the recovery of steelhead and other culturally important fish resources so that all residents in the Columbia River Basin might enjoy nature’s bounty.