Striped Bass in the Columbia River?! 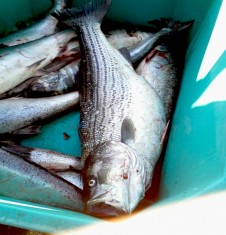 This striped bass weighing 52 lbs. was caught by a lower river commercial fisher in June.

This summer, striped bass—also known as  “striper”—were recorded several times this summer in the Columbia River. Striped bass are native to the East Coast, but have been non-native residents of the West Coast since the 1880s. Though they are primarily a marine species, striped bass can move freely between fresh and salt water and can live permanently in fresh water; similar to the white sturgeon.

At least three striped bass were reported this summer, a 15 lb. fish found dead on a lower river beach, a 52 lb. fish caught in June by a lower river commercial fisher, and 12-14 lb. fish caught by an Indian fisher in The Dalles pool in August. The last fish was similar in size to a striped bass that was observed passing the Bonneville Dam counting window a couple of weeks prior. Commission fisheries staff conducted biological sampling on The Dalles pool striped bass and determined it was a 6-year-old female fish with immature eggs, with an empty stomach.  It is not unusual to hear of striped bass in the Columbia River downstream of Bonneville Dam, although it has been several years since any were reported and this is thought to be the first year that one has made it upstream of Bonneville Dam.