Misunderstood, and hardly a monster

If you’re lucky enough to see a migrating adult Pacific lamprey, rest well in the knowledge that it won’t attach itself to you to suck your blood. The chances for river carnage are actually the other way around, as lamprey suffer from human activity that has destroyed or degraded their habitat, made their migration difficult or impossible, and have endured policies that poisoned rivers and streams to kill them off. 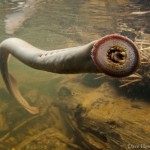 Does this look like the face of a blood sucking monster?
Photo courtesy USFWS from Freshwater Illustrated, Dave Herasimtschuk.

The Pacific lamprey with its distinctive sucking disc mouth is easily recognizable, and also easily misunderstood. They are anadromous like salmon, meaning they are born in freshwater, migrate to the ocean to feed and mature, then return to freshwater to spawn the next generation. They use their sucking disc mouth out in the ocean to parasitically feed on fish, but in freshwater, they only use it to attach to rocks and other smooth surfaces to rest on their tiring journey upstream.

The lamprey is an ancient fish that has survived ice ages, the coming and later extinction of the dinosaurs, and shifting continental plates for hundreds of millions of years. Now, in less than a century, they have declined to the point where their very existence is in peril. The tribes of the Columbia Basin, honor-bound to protect them, are working to restore this important part of the ecosystem and tribal culture.

Pacific lamprey (Entosphenus tridentatus) are one of the 40 members of the lamprey family still found on earth. The lamprey family is one of the oldest of all the vertebrates and is the only living representative of this ancient line. Lamprey have been on earth between 400 and 450 million years (compared to 200 million for sturgeon, 6 million years for salmon, and a minuscule 100,000 years for humans). They appeared during the same era as insects and seed-bearing plants.

Click here to learn more about the Pacific lamprey and what the tribes and other agencies are doing to protect and restore this often forgotten or vilified fish.