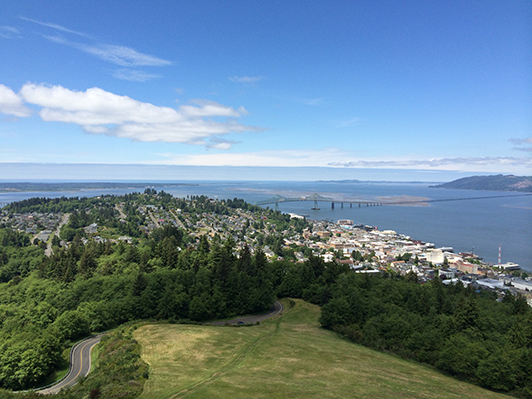 The mouth of the Columbia River at Astoria.

A recent meeting in Astoria on the Columbia River Treaty brought together representatives from 15 Columbia Basin tribes. Our discussions focused on the Columbia River and how to best serve its needs along with our own. During the three-day meeting, we got the opportunity to tour several sites from the estuary to the river mouth. I am always impressed to see the waters of N’Chi Wana return to the ocean from which they came. Some of this water began its journey 1,365 miles upstream in Yellowstone Park. Some of it began 1,240 miles upstream in the Canadian Rockies of British Columbia. The Columbia empties nearly 2 million gallons of water into the Pacific Ocean every second.

Equally amazing to this flood of water flowing into the ocean is the flow of salmon and other fish swimming back up. Many of these fish swim hundreds of miles each way during their lifecycle, with sockeye travelling the furthest. This year’s sockeye run is expected to be quite large, and they are primarily from the Okanogan River in Canada. The success of this run underscores the importance of restoring upriver passage into Canada. If we can get salmon into Canada and central Idaho, they can take advantage of their former range, some of which is pristine wilderness habitat. Reopening passage, improving degraded habitat, and committing to the actions and recommendations in the newly updated Wy-Kan-Ush-Mi Wa-Kish-Wit tribal salmon restoration plan will all play a role in bringing back healthy, sustainable fish runs throughout their entire historical range.

The National Park Service explains the long process that occurred working with the U.S. Army Corps of Engineers to restore wetlands. This is the site of the levee breach at Fort Clatsop. In cooperation with the Cowlitz Tribe, the wetlands are quickly guided by natural processes of healing where the river meets the land.