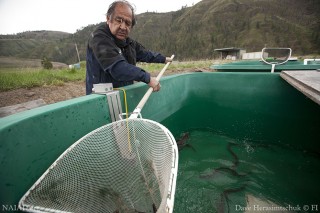 The film “The Lost Fish” (the film trailer appears at the end of this post) about tribal Pacific lamprey restoration that was produced by CRITFC and Freshwaters Illustrated was selected for inclusion in this year’s Portland Ecofilm Festival. The festival features screenings of new films covering topics of nature conservation, environmental activism, agriculture, and community wellness.

“The Lost Fish” was selected for telling the story of “the people working to raise public awareness of the ecological importance, conservation needs, and cultural significance of Pacific Lamprey to Pacific Northwest Tribes.”

In addition to screening the film on July 24, the festival selected Nez Perce tribal elder Elmer Crow, who was featured in the film, to receive this year’s EcoHero Award. The award was accepted by Elmer’s widow Lynda. Elmer perished while saving his grandsons from drowning last year. Elmer was selected for his lifetime of conservation work benefiting Pacific Lamprey. Elmer’s family, the Freshwaters Illustrated filmmakers, and the Columbia River Inter-Tribal Fish Commission participated in a post-film panel to discuss the film and Mr. Crow’s legacy. 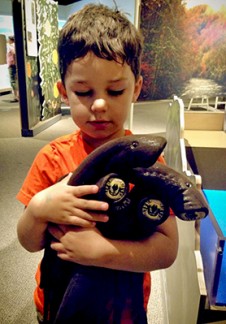 “The Lost Fish” has been shown at locations throughout the Columbia Basin. It was premiered on the reservations of the four CRITFC member tribes first. Since then, it has been screened at cities and events in Oregon, Idaho, and Washington. The most recent event was in Portland, where the film was presented at the Oregon Museum of Science and Industry (OMSI) as part of the museum’s new Roots of Wisdom exhibit. This exhibit features examples of how Native Americans and native Hawaiians are developing innovative solutions to tackle current environmental challenges. The exhibit also presents how native people are combining traditional knowledge with modern science to restore ecosystems. The Umatilla Tribe’s lamprey restoration efforts are featured in the exhibit, which includes an activity where visitors take a lamprey model and scan it in a reader to see where in the Columbia Basin each one came from and how far it had migrated.