A fire at the Underwood In‑lieu Site on September 15 destroyed or damaged much of the north end of the site. Early indications are the blaze started around 6:00 a.m. when a propane tank connected to a cooking stove that a resident was using caught fire. The fire quickly spread to destroy several other structures, vehicles, boats, fishing nets, and boat trailers. Johnny Jackson’s house, drying sheds, storage sheds, nets, and vehicles were completely lost. Several site residents and users were displaced as a result of the fire.

The Skamania and Klickitat County fire crews, Underwood Fire Department, US Forest Service, and Washington Bureau of Land Management assisted in containment. Yakama Nation fire crews were involved in the mop up and the Bingen and White Salmon Fire Departments responded to the fire. Lack of a water connection for the fire crews made it necessary for multiple fire departments with tanker trucks to respond to the fire in order to save as much of the site as they could. The local Red Cross was on site to assist victims who lost everything.

The current fall commercial fishery will delay a complete clean up of the site. A full clean up will require the site to be cleared out and closed during the work. The site will remain open until the fall commercial fishery ends to accommodate fishers currently using the site. After the fall commercial season ends, the CRITFC Fishing Site Maintenance team will coordinate with site users to remove undamaged gear, equipment, boats, vehicles, trailers, and campers. Once users have left the site, the team will remove the destroyed structures, vehicles, boats campers, trailers and storage structures. The clean up of the site will take several weeks.

CRITFC will be coordinating with the BIA, Yakama Tribal Housing, and the affected tribal members to assist with the lost housing needs. 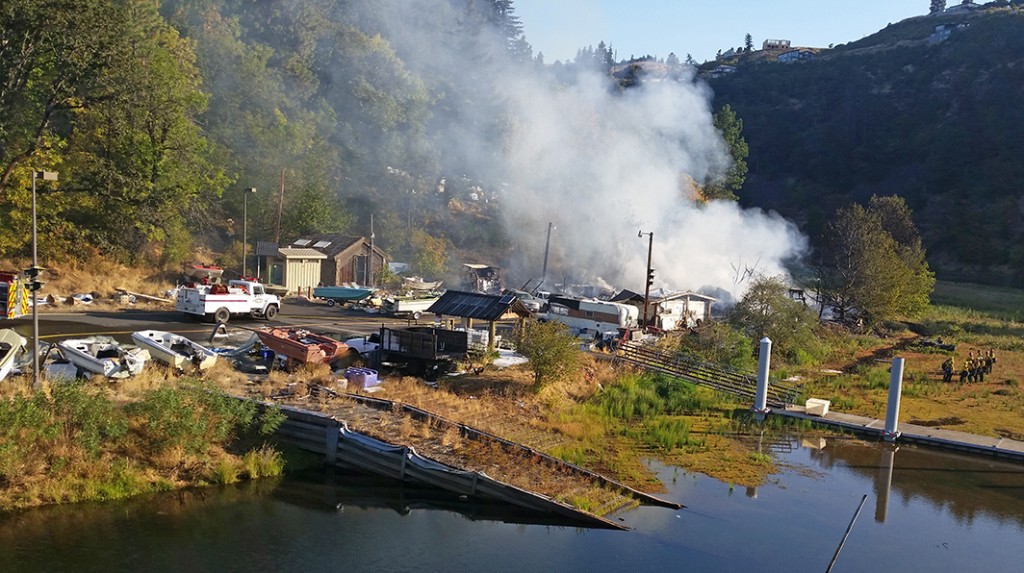 The Underwood Fire Department monitoring the smoldering remains of the fire that that destroyed the north end of the Underwood In-lieu Site. Crews from eight tribal, state, county, city, and federal departments were dispatched in an effort to put out the blaze. Photo courtesy Joe Zendt, Yakama Nation Fisheries.