Recent research from NOAA Fisheries is trying to find out just how many adult salmon are being lost between the mouth of the Columbia River and Bonneville Dam. The number they came up with is quite alarming.

The fish loss research, which began in 2010, shows a steady increase in fish deaths in that stretch. Adjusted for harvest and other salmon impacts, the 2014 average spring chinook salmon survival was just 55 percent, down from 69 percent in 2013 and 82 percent in 2012. If the 2014 estimate is representative of the overall run, this means approximately 45 percent of the 2014 spring chinook run died somewhere between Astoria and Bonneville Dam. 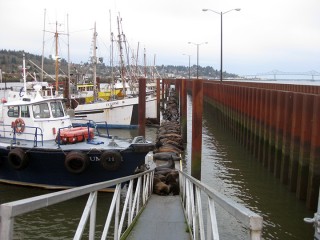 Right now, the research can’t tell how much of this fish loss is due to sea lions and seals. The project lead researcher Dr. Michelle Wargo-Rub of the Seattle-based Northwest Fisheries Science Center reported, though, that fish mortality and the number of sea lions in the estuary have increased dramatically in recent years. This coincides with reports from tribal fishers, who have been seeing evidence of sea lion and seal predation on damaged fish in their nets.

CRITFC and other agencies are trying to fill in this gap in the research. They hope to determine just how much of the loss being seen is due to sea lions and seals. One current CRITFC research project is counting sea lions and seals along the entire lower river, not just at Bonneville Dam.

The fish loss research focuses on spring chinook because that is the time of year when the sea lion population is largest in the river. The sea lions follow the spring chinook run coming up the river between March and May. Most of the sea lions then go to breeding grounds off southern California in the summer.

About 68 percent of the fish the researchers tagged and sampled near Astoria were destined for the river and tributaries above Bonneville based on genetic testing.

Survival varies over the course of the run, Dr. Wargo-Rub said. It appears that a higher percentage of fish in the early part of the run die before reaching Bonneville Dam than fish migrating later in the spring. Early returning fish also take longer to reach the dam, which exposes them to sea lions and seals for a longer time, she said.

CRITFC has been working with the States of Oregon and Washington, the Army Corps of Engineers, and the U.S. Department of Agriculture to haze California and Steller sea lions below Bonneville dam to hopefully change their behavior. The CRITFC hazing crew uses cracker shells, seal bombs, and boat chases to attempt to change the sea lions’ feeding location and cut down on the number of salmon they eat. This keeps them away from the fish ladders but doesn’t keep the sea lions and seals from coming up the river in the first place.

“The tribes and state and federal agencies are pouring enormous resources and millions of dollars into salmon restoration. We can’t afford having all our hard-earned gains to be eaten by this growing sea lion predation problem,” said CRITFC Chairman Carlos Smith. “Our hazing effort is really a stopgap measure until this underlying problem is dealt with.”

The tribes continue to advocate for federal agencies to address the growing problem. The issue is made particularly thorny as it pits two major conservation laws (Endangered Species Act and the Marine Mammal Protection Act) and the tribal treaties against each other.