How Tribal Fisheries are Set

The authority to set fishing seasons is an important responsibility of the Columbia River treaty tribes. The four member tribes created CRITFC partly to provide a forum where they could coordinate their fishery responsibilities and activities. CRITFC itself has no authority to set fishing seasons or create fishing regulations for any of the member tribes. This power lies solely with the tribes themselves. For example, Yakama fishing seasons and regulations are set by the Yakama Nation only and apply only to Yakama tribal members. The four Columbia River treaty tribes try to keep their Zone 6 fisheries consistent with each other to promote fairness for all of the fishers, reduce confusion, and reduce the level of law enforcement needed to enforce separate regulations. Since tribal fishers are only subject to their own tribe’s fishing regulations, any differences between the tribal regulations results in differences in enforcement. For example, the number of hook-and-line gear allowed for tribal fishers fishing in Zone 6 varies by tribe. Therefore, it may appear that CRITFC Enforcement is picking on certain tribal members who have a few poles in the water while ignoring fishers using as many as they want. They are just enforcing a difference in tribal regulations. In general, tribal fishers benefit from having seasons and regulations that don’t vary from tribe to tribe. 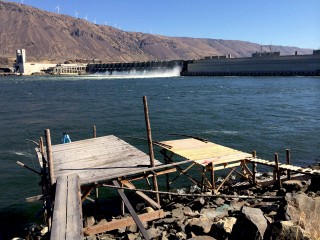 Scaffolds below John Day Dam, part of the Zone 6 fishing area that the four tribes all share management authority over.

Establishing a four-tribe agreement in Zone 6 fisheries is a multi-step process and the tribes themselves are in control the entire way. This process begins when the CRITFC commissioners from each member tribe meet. The CRITFC commissioners are tribal elected officials or appointees. The commissioners gather monthly at regular CRITFC commission meetings. During the height of fishing seasons, they also meet via telephone on a weekly or sometimes daily basis to review the latest harvest and run size information that is being continuously gathered by CRITFC and tribal staffs. Using this up-to-the-minute information, the commissioners work together to decide on a common fishery schedule. They take into account their own tribe’s priorities in regards to ceremonial, subsistence, and commercial fisheries. Deliberations can be very lengthy at times, but if successful, they arrive at a fishery opening recommendation that they all can support. The commissioners then take the fishery recommendation back to their tribal councils. Each tribe then deliberates whether or not to set its fishery to the recommendation. If they accept the recommendation, they set their tribe’s fishery opening by resolution. It is only at this point that the opening is official. The tribes are not bound to agree with the commissioners’ recommendation. If a tribe does not agree on a common season, it is within their rights and authority to adopt differing regulations. After the tribes have set their fishery, they post the details publicly to ensure that all the fishers are notified. Finally, after all this tribal work and deliberation has been done, CRITFC assists the tribes by sharing the official fishery openings via mailings, Facebook announcements, and text message to the tribal fishers.