Rising rivers due to snowmelt is one of many cues that the Creator tells us that spring is here.  The normal pattern of rising spring river levels is a cue to salmon smolts to move downriver as fast as possible, which helps ensure a safer passage route out to the ocean.  For this spring, though, many watersheds are lacking snowpack in a big way.

This winter has been short-changed due to El Niño in the tropical Pacific Ocean, which tends to deliver warm, dry winters to the Pacific Northwest. The Pacific Ocean usually has a predictable  20- to 30-year warm-cold ocean cycle. We should be in a cooler part of the cycle, but conditions have departed from the norm and the ocean is warmer this year. This warmer ocean, in turn, has increased the effects of the El Niño. 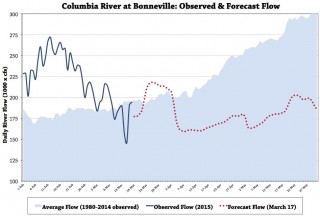 The snowpacks in the Oregon-Washington Cascades have been very low.  Snow water equivalent values were 25 to 75 percent below normal this winter.  A major storm hit in early February, which is normally a time when it would have fallen as snow. Instead, the warm temperatures resulted in the precipitation falling as rain, which caused many flashy rises in tributary streams (see graph). These peak flow events came two to three months early, which means less water will be available for the summer season and the mainstem river peaks of late May.  The latest CRITFC water supply forecast for the Columbia at The Dalles is 95 percent of normal (NOAA forecast is 80 percent), which doesn’t sound so bad. Unfortunately the warm temperatures have resulted in all this water coming downstream soon after it falls rather than being stored in snowpack to be released during the warm summer months. This means that streams this summer will be hotter than normal, the low water levels will create fish passage and habitat problems, and there will be a greater chance of wildfires.