CRITFC Executive Director Paul Lumley’s Message One of the key pieces of information in fishery planning is the pre-season forecast—an estimate of how many salmon will be returning. This isn’t always a perfect science and it is based on past perfomance. In some years, the forecast is close to what we see, but just as often, the forecast can be way off. Forecasts are based on the historical relationship between age classes. For example the number of jacks returning in one year is used to forecast the number of four-year-old fish in the next year. This assumes that the future will behave just as it has in the past. The forecast techniques are all based on the assumption that survival rate, particularly in the juvenile life stages, remains relatively constant over time. As with many other things in life, conditions vary over time, resulting in these assumptions to be not at all what occurs when the fish actually come in. 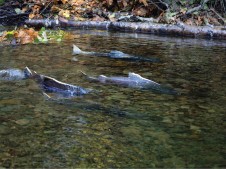 During the past few years, we have seen very high spring chinook jack returns—more than we have ever seen before. While we still saw large spring chinook adult returns, the proportion between adults and jacks did not match up with the proportions seen in the historical data. Jack counts is one of the most important methods we use to predict the adult returns, and with their numbers abnormally high, our adult returns were sometimes “over projected.” We’re still studying why so many jacks returned last year. The connection between jack counts and future adult counts makes this year’s low jack return troubling, as it might indicate low adult chinook returns in the upcoming years. Despite being imprecise, forecasts are a valuable tool for fishery planning. We know that the actual returns will vary from the forecasts; we just can’t tell by how much and in what direction until the fish start to show up. Each tribe sets its own fishing seasons, and to do this in a responsible and appropriate manner, they depend on accurate and up-to-date run size information and forecasts. CRITFC and tribal fishery staffs gathering this information and adjust or fine-tune the pre-season forecasts as the actual return progresses. We are constantly trying to make these forecasts more reliable, but with the major changes that are affecting the river, the salmon, and the climate, this is turning out to be harder than it was in the past.