Warm Springs tribal member Truman Merrifield was selected as an intern in CRITFC’s TRAIL Project. This project aims to foster the educational pursuits of Indian students studying Science, Technology, Engineering & Math (STEM) degrees by providing research experience, mentoring, and an opportunity to explore career options in fisheries and natural resources at all levels. CRITFC and its member tribes hope to help create the next generation of warriors with the commitment and knowledge to protect the resources upon which their cultures are based. 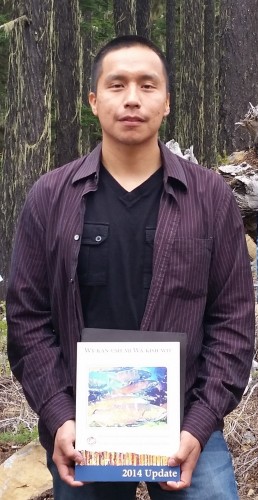 Truman is a Forest Resources Technology major at Central Oregon Community College. He graduated from Madras High in 2007, and returned to college in 2013. He plans to transfer to Oregon State for a bachelor’s degree in Environmental Science.

“I always wanted to work for Natural Resources,” Truman says. “I started as a wildland fire fighter for four years. Then I wanted to learn more about our natural resources—plus I wanted a better financial support system than seasonal work offered me.”

Even as a young child, Truman was drawn to nature. He would wander through the outdoors at Warm Springs and notice that the snow was less and less—Not as much snow to play in! He was observing climate changes even before he knew the term.

Truman works for Natural Resources in the Water and Soil Department as a Resources Technicians on water quality data and stream flows.

For his CRITFC internship, Truman will be surveying different logging units on soil moisture, density, and plant association with the different effects logging has on understory plants and snowpack. He ties this to First Foods, which is extremely important to the tribes. He is using the stories from his elders, such as his grandfather Harrison Davis Sr., and science to show the effects climate change is having on the reservation.

He sees that the deer and elk populations are being moved around a lot, and the Root Feast was held earlier this year because of an early spring. Drier winters mean longer and hotter fire seasons and none of this is good for Warm Springs.

Truman hopes that with his education, he can bring his knowledge to protect tribal sovereignty and treaty rights. Protecting and preserving are two of his passions, and they are tied directly to treaty rights and climate change.

Truman was recently honored with an Intertribal Timber Council Scholarship. He is only the third Warm Springs tribal member to receive one.

Truman recently spoke on the effects of climate change on First Foods and cultural values at the Climate Change Conference in Portland, sponsored by Affiliated Tribes of Northwest Indians.

Truman knows he and his family are still learning, but he knows he wants to create a healthier and better future for his family and the community he loves.