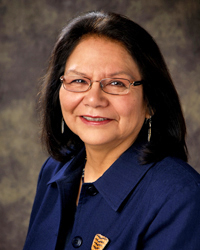 Umatilla tribal leader N. Kathryn “Kat” Brigham was selected by leaders from the Warm Springs, Yakama, Nez Perce, and Umatilla tribes to lead CRITFC as its 2015-2016 Chair. The current CTUIR Board of Trustees Secretary, Brigham is a veteran of domestic and international salmon management that has left a lasting impression on Columbia Basin salmon policy. Brigham was introduced to fisheries issues as a young adult when she would attend fisheries meetings with her grandfather, tribal leader Sam Kash Kash. During this time, he instilled in her the need to protect fisheries resources for the next seven generations and beyond. In 1976, Brigham was appointed to the Umatilla Tribe’s Fish and Wildlife Committee. Brigham was one of the founding commissioners of CRITFC when it was formed in 1977. During that time, she was instrumental in the implementation of the 1976 Memorandum of Agreement between the Bonneville Power Administration and the tribes, the U.S. v. Oregon Columbia River Fish Management Plans, the Pacific Salmon Treaty, and the Northwest Power Act. “During my service in fisheries, I have seen Columbia Basin salmon issues evolve greatly,” said Brigham. “When I started, there were some Columbia Basin salmon runs that were heading toward extinction. Today we are seeing some of the strongest returns in years. We celebrate these successes and continue to address the challenges that we still face. Some of the largest remaining threats to our region’s fisheries include climate change, water quality and the transportation of coal and oil.” Brigham assumes the position from Carlos Smith (Warm Springs). His leadership guided the commission through a year where the tribes waded into key battles against coal and oil transportation projects, secured advancements in the renegotiation of the Columbia River Treaty, and celebrated abundant salmon returns. “The Warm Springs have been true leaders whose commitment to protecting tribal treaty rights have provided a solid platform for the next year,” said Brigham. “As leaders, we have the responsibility to fight for our treaty rights, for our tribal members and the next seven generations of tribal members. Tribal families on the Columbia River are exercising their treaty fishing right and passing down traditions to their children and grandchildren. Our people deserve to know that their rights are being protected and enhanced, not threatened or diminished.” The other CRITFC officers elected were Patrick Luke (Yakama), vice chair; Leotis McCormack (Nez Perce), secretary; and Carlos Smith (Warm Springs), treasurer. The election of CRITFC officers takes place every June with the seats rotated among the four member tribes. The officers were sworn in at the July CRITFC meeting.