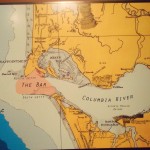 From the moment springs and creeks begin in the mountains, they begin a process of erosion, slowly eating away the rock and soil over which they flow. The water picks up bits of silt and sand on its journey to the sea and carries these materials as long as it has enough speed. As the water slows, it drops what it is carrying, with the larger pebbles and sand falling out first and the silt and fine sediment falling out last. It is a natural process that, among other things, helps to clean out waterways and supply downstream areas with fertile new soil. Salmon benefitted from this annual cycle because the gravel streambeds were cleaned of silt in time for them to build redds and the estuary received nutrients that helped the migrating smolts. Historically, the Columbia River basin carried millions of tons of sediment. Some made it all the way to the ocean while some dropped to the riverbed in the slower stretches. This riverbed sediment was not permanent since the spring floods would wash it further downstream and out to the ocean. The map to the right shows the Columbia River bar and lighter colored shallow area that extends past the river mouth into the Pacific Ocean. This is the result of millions of tons of sediment deposited by the river. The Columbia is a low sediment, fast moving river, so its sediment build up is below the ocean surface or carried further up the coast by ocean currents. In the 1930s, humans began a complete transformation of this natural system with the construction of the first mainstem dams. Once the free-flowing river was converted into series of reservoirs and much of sediment that the river carried settled behind the dams instead of travelling further downstream. As each dam was added to the system, more sediment was trapped, where it is slowly filling each reservoir. 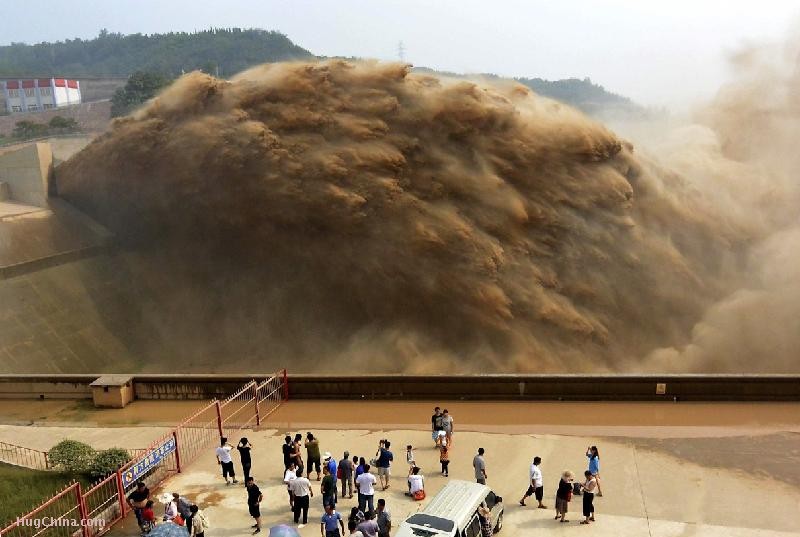 In some places, engineers have tried to stop sediment build-up by installing base drains that can be opened up occasionally to flush out the system. The base drains at the Xiaolangdi Dam on China’s Yellow River are opened annually to flush the estimated 30 million tons of sediment that builds up each year. No Columbia or Snake River dams have this feature. Photo by China Photo Press.

The Liebherr T-282B, the largest dump truck in the world.

Scientists estimate that the Columbia River transported 16.4 million tons of sediment each year up until 1935, when Bonneville Dam was built. To give an idea of how much sediment that is, it would take a Liebherr T-282b, the largest dump truck in the world capable of carrying 400 tons, around 41,000 loads to transport it. Despite a significant increase in soil runoff from agriculture and other human development, only 8 million tons of Columbia River sediment reaches the Pacific Ocean. Sediment still enters the river system, only now over half of it builds up behind each of the dams. High water years can help somewhat, as the faster water speed and open dam floodgates flushes extra sediment downriver. Unfortunately, these events aren’t common enough to prevent sediment build-up. Without the annual floods to wash sediment downstream, the reservoirs are slowly filling in.

The Denadai Dam in the African nation of Eritrea. Photo by Adriano de Vito from Google Maps.

Halting sediment flow is a problem with all dams and has catastrophic effects on ecosystems and natural resources. The rate that a reservoir fills with sediment depends on the amount of sediment a river carries and how fast the river flows. Fortunately the Columbia River system is a low sediment river, so the process isn’t happening as quickly as high sediment rivers like the Mississippi or Colorado Rivers. Worldwide, there are examples of dams on high sediment rivers already completely filled in, making them useless for fish passage, power generation, flood control, or irrigation. The photo of the Denadai Dam in the African nation of Eritrea shows its reservoir completely silted in and is now a just a meandering stream that falls over the face of the dam. 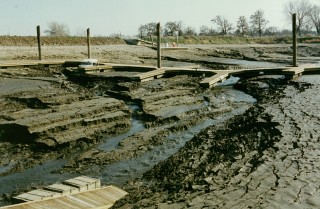 A marina in Clarkston, Washington during the 1992 Lower Granite drawdown. Photo from Port of Lewiston.

Here in the Columbia Basin, the Corps of Engineers regularly dredges some reservoirs to keep shipping lanes open and prevent boats from grounding. This is increasingly common in the Lower Granite reservoir, which captures much of the sediment coming out of Idaho. In 1992, the Corps of Engineers drew down the reservoir behind Lower Granite Dam. The photo of Red Wolf Marina in Clarkston, Washington to the right, shows the extent of built up sediment only 17 years after the dam was built. 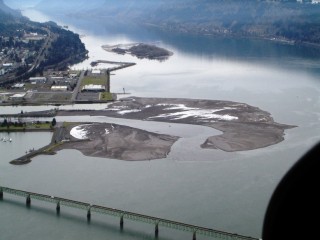 In low water years like this one, the silt build-up is more obvious. Fishers throughout Zone 6 have seen sand bars in new locations, traditional fishing holes filled in with sediment, and changes to the river flow. These changes are particularly noticeable at the mouths of tributaries. When a fast-moving river meets the still water of a reservoir, it can no longer carry much sediment, which quickly settles, creating a sand bar or delta. Significant deltas, sand bars, and filled fishing locations are at the mouths of the Hood, White Salmon, Little White Salmon, and Deschutes Rivers. This is continually happening, and major flooding events can bring quick changes. In November 2006, Hood River had a flood that dumped thousands of cubic yards of debris right at its mouth, greatly expanding the delta that extends into the Columbia. This issue has the potential to impact the treaty fishery in Zone 6 and beyond and CRITFC and the tribes want to gather as much information about it as possible in order to formulate and advocate for a solution. If you have seen any changes like the ones listed above, please report the change, location, and date to CRITFC. By providing information about these changes, tribal fishers can help CRITFC and the tribes gain a greater understanding of the extent of the problem.