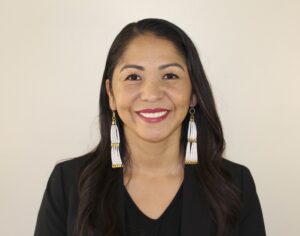 “This is a great day for CRITFC and its member tribes,” said CRITFC Treasurer Jeremy Takala (Yakama). “It is an honor as we see more and more Native American women take leadership roles nationally, in our tribal governments, and in the care and management of our First Foods. I believe Aja will carry on the tribal vision of putting fish back in the rivers that this organization has been working toward for nearly 50 years.”

“Our resilience is how the tribes have overcome challenges,” said CRITFC Vice-chair Ron Suppah (Warm Springs). “We bend and change, but always stay true to our culture and values. Our selection of Ms. DeCoteau is a positive change and I know that the future of CRITFC is in good hands.”

The selection committee, comprised of leadership from all four of CRITFC’s member tribes, was impressed by DeCoteau’s expertise shown in her career as well as the leadership abilities exhibited while serving as the organization’s interim executive director. “Aja has shown her skill in the needs and demands of this role over the past six months,” said CRITFC Secretary Jeremy Wolf (Umatilla). “I want to express my pride and congratulations, not only in her abilities, but also the unique perspectives she will bring to our work.”

DeCoteau is a citizen of the Confederated Tribes and Bands of the Yakama Nation and has other tribal lineage with the Cayuse, Nez Perce, and Turtle Mountain Band of Chippewa Indians. She grew up in Wapato, Washington on the Yakama Reservation and has worked in natural resources her entire career. For the past 12 years, she was the manager of CRITFC’s Watershed Department where she led a team focused on the implementation of Wy-Kan-Ush- Mi Wa-Kish-Wit—the tribes’ salmon restoration plan, activities that impact ecosystems at the watershed, river basin, and regional landscape levels and coordinated the organization’s climate change research and response.

“Since I was a child, my family, elders, and tribal leaders have taught me the significance of salmon as one of our First Foods and the importance of tribal treaty fishing rights,” said DeCoteau. “As tribal people, our natural resources are our cultural resources, which is why I have dedicated my career to protect them. I am honored and excited to lead CRITFC and work together with our member tribes to bridge traditional knowledge, scientific expertise, and cultural connection to ensure that we have salmon and other natural resources for generations to come.”

As CRITFC’s Executive Director, DeCoteau will work closely with its governing body to lead the organization’s strategic direction and a team of more than 130 employees in four locations in Oregon, Washington, and Idaho to put fish back in the rivers, protect treaty fishing rights, share salmon culture, and provide direct services to tribal fishers along the Columbia River.

“I thank Aja for her time, commitment, and dedication, not only the service to her tribe, but to Native Americans and the Columbia River Inter-Tribal Fish Commission,” said CRITFC Chair Quincy Ellenwood (Nez Perce). “There is a long road ahead of us and I have the ultimate confidence in her and look forward to working with her.”

DeCoteau also sits on the Board of Trustees for Earthjustice, the Board of Directors for the Columbia Land Trust and the Portland Energy Conservation, Inc, and the Board of Advisors for WorldOregon. She received her Bachelor of Arts in Environmental Studies and Native American Studies from Dartmouth College and holds a Master of Environmental Management from Yale University, School of the Environment.