Since time immemorial, tribes have followed well-worn trails to their traditional fishing, hunting, and gathering grounds. The Columbia River tribes consider rivers and streams to be the trails that salmon use on their journey to get to their traditional hunting ground: the ocean. After several years, they follow those trails home, their bodies carrying the bounty of the sea back with them. Thanks to this epic effort and sacrifice, animals, plants, and people hundreds of miles from the coast can partake in the richness that the ocean provides. 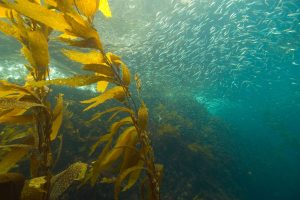 A school of sardines, an important food for salmon during their time in the ocean. Photo: California Department of Fish and Wildlife.

Today is World Oceans Day, a day to reflect on the great water that sustain life on earth and our need to protect them. Sahaptin*-speakers call the ocean atáchiish, the “great water.” Further inland, the Nez Perce called it ’eteyékuus, which can translate as either “distant water” or ”unbelievable water.” Indeed, unbelievable is an apt description of the ocean. Covering 70 percent of our planet, they are home to millions of species of plants and animals. They provide us with food. They are both the source and destination of our rivers and streams. They are critical to regulating the planet’s climate. They are the lungs of Mother Earth, providing 70 percent of the oxygen in the atmosphere. 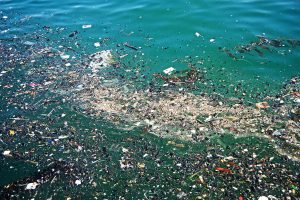 The Great Pacific garbage patch is a Texas-sized concentration of plastics, chemical sludge, and other debris that have been trapped by the currents of the North Pacific Gyre, the circular current that flows in a clockwise circle from North America to Asia. Photo: Million Waves Project

Currently the oceans are not well, yet humans continue to dishonor and disrespect them. The oceans are overfished and even the deepest parts are polluted. The majority of marine species are drastically dwindling; the Great Barrier Reef is dying; a garbage island the size of Texas is floating in the North Pacific Ocean. Marine animals are choking to death in a sea of plastic; a study projected that by 2050, there will be more plastic than fish in the world’s oceans; and now there’s an estimated 8 million tons of COVID-related trash like face-masks and gloves in the oceans. Major accidents like the BP oil spill in the Gulf of Mexico, the Exxon Valdez spill in Alaska, and the Fukishima radiation plume rightly get our attention, but it is the cumulative impact of a century of smaller actions and activities that burden the oceans the most.

In addition to overfishing and pollutions, the oceans are being profoundly affected by climate change. More than 90 percent of the excess heat trapped by greenhouse gases is absorbed by the oceans.  Ocean acidification, caused by seawater absorbing the extra CO2 humans emit into the atmosphere, has the potential to completely destabilize the entire ocean food web. Ocean currents are changing, altering food webs and animal behavior around the world. Warming oceans are creating unpredictable and extreme weather patterns across the globe and amplifying tropical storms and hurricanes, droughts, and heat waves. Melting sea ice is fundamentally altering entire polar ecosystems and will raise the global sea level to a point where it threatens the earth’s coastal areas and cities. Oceans have historically been a buffer for climatic fluctuations, but they are near their capacity to stabilize our climate. 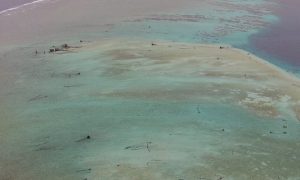 The remains of one of six partially eroded South Pacific islands in the Solomons. Photo: HANDOUT/Reuters.

The problems the oceans face require a response on a massive scale. It will require concerted efforts from all the world’s nations and actions by international, national, tribal, state, and local governments. The Columbia River tribes are playing a role, both by promoting national actions to address climate change as well as working on habitat improvement and river restoration projects to care for and restore damaged rivers and streams that flow through their homelands and eventually to the ocean. They recognize that effective and holistic Columbia Basin salmon management involves the ocean, as well. In 2020, CRITFC assumed stewardship of the Center for Coastal Margin Observation and Prediction (CMOP) seeing it as a perfect complement to their efforts to combine cutting edge scientific research with traditional ecological knowledge in the estuary and ocean environments.

Helping and healing the oceans is not only a job of governments; it will also require personal commitment from all of us, both in advocating for the oceans with our elected officials to making changes to our lifestyle that benefit the environment. The Nature Conservancy suggests these four changes that individuals can commit to that would have an impact on improving ocean health. These are:

*Sahaptin is the language family of the mid-Columbia tribes with variants spoken by the Yakama, Umatilla, and Warm Springs tribes.