The Oregon Health Authority has released a fish consumption advisory for Pacific lamprey in the Columbia River and its tributaries in Oregon due to high levels of mercury and PCBs (polychlorinated biphenyls) in lamprey tissue. This advisory is to limit people’s exposure to these toxic substances. This advisory doesn’t include other migratory fish such as salmon and steelhead.

OHA recommends people to limit consumption of lamprey (eels) to:

The Oregon Health Authority set this serving limit to give people a guideline to prevent a dangerous level of exposure to the toxic substances. This advisory recommends limiting lamprey consumption, not completely removing it from your diet. Fish (including lamprey) are rich in nutrients including omega-3 fatty acids which provide protection from heart disease and are an important brain food for you, your children, and your unborn child.

“Lamprey have been an important part of the cultures, diets, and ceremonies of Columbia Basin tribes since time immemorial,” said Aja DeCoteau, executive director of the Columbia River Inter-Tribal Fish Commission. “The tribes have been successfully leading the effort to restore this threatened fish throughout the Columbia River Basin, not only to protect its role in the ecosystem, but also to preserve our access to this important First Food. As Oregon’s largest consumers of lamprey, this consumption advisory will impact tribal people most of all. We must all work together to make limiting consumption a temporary solution because the tribes believe that the long-term solution to this problem isn’t keeping people from eating contaminated fish—it’s keeping fish from being contaminated in the first place.”

Babies, children under six years of age, and persons who are pregnant, planning to become pregnant, or are nursing, should take extra efforts to follow this advisory. The health effects on developing fetuses, babies, and small children of eating contaminated fish can include lifelong learning problems and cancer.

The tribes are well aware of the situation and have been working to address the cause, which is water pollution. The tribes believe that the long-term solution to this problem isn’t keeping people from eating contaminated fish – but keeping fish from being contaminated in the first place.

This advisory is for the Columbia River and its tributaries in Oregon. 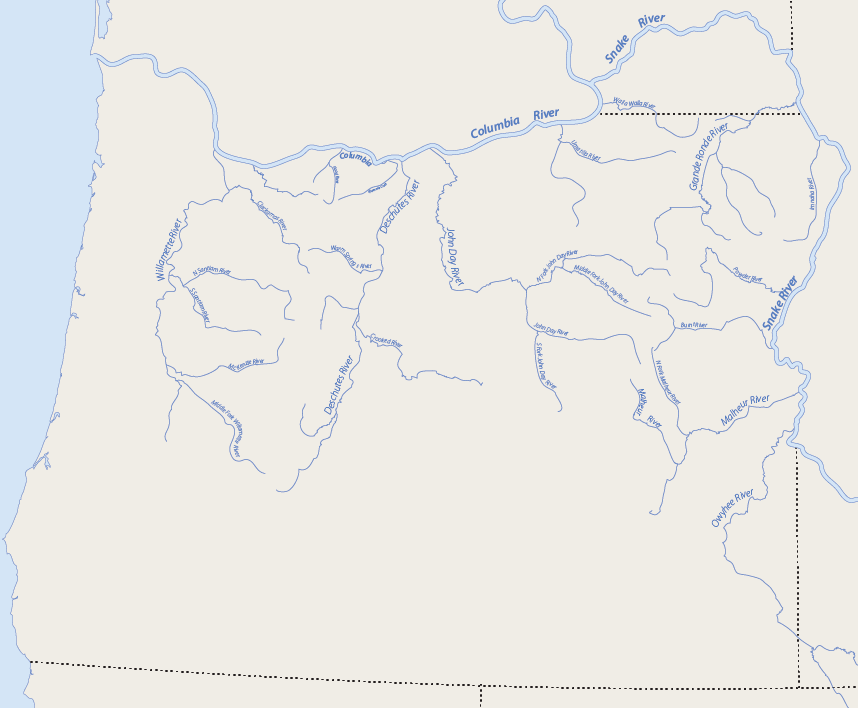 Developing fetuses, nursing babies, and small children are most susceptible to PCB and mercury health effects. It’s particularly important that those who are pregnant and nursing follow the advisory advice to protect their unborn fetuses or nursing children.

Q: The advisory is for the Columbia River and its tributaries in Oregon. Should I follow this advisory for lamprey harvested in a Washington or Idaho river?

This advisory was issued by the State of Oregon Health Authority, which cannot make advisories for other states. OHA scientists found similar levels of contaminants at all the sample locations, which lead them to suspect the contaminants came from the lamprey’s time in the ocean rather than a specific river. With that being the case, it’s probably best to follow the consumption advisory for any Pacific lamprey you eat, regardless of where it was harvested. 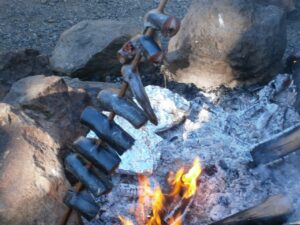 The advisory meal recommendations are 4 servings of lamprey per month for the general population (adults, teens, children over 6 years of age) and 2 servings of lamprey per month for the vulnerable population (individuals who are pregnant, may become pregnant, or are nursing, children under six, or individuals with thyroid or immune system problems). An adult serving is 8 oz. and a children’s serving is 4 oz. The segments in the photo to the left are approximately 8 oz pieces, however it might be a good idea to weigh out a portion to get an idea of how big to cut your pieces for cooking. Click here for more guidance on fish meal sizes»

Q: Can the contaminants be reduced by proper cleaning or cooking?

Preparation methods that allow fats to drop off the meat such as smoking, drying, or grilling can reduce the PCB concentration levels. The oils and fats in the fish are where PCBs accumulate.

There is no way to reduce mercury by cleaning or cooking because it builds up in the fish’s flesh.

Q: What are the health impacts of consuming mercury?

Mercury can harm the central nervous (brain) and immune systems. If a baby or fetus is exposed to high levels of mercury, the child may develop lifelong learning and behavioral problems. A fetus or child is more sensitive to mercury than an adult. If a person is exposed to mercury over time, it can harm organs including the kidneys and heart.

Q: What are the health impacts of consuming PCBs?

PCBs consumed at high levels can impact men and women of all ages. PCBs may cause a variety of health problems depending on the amount a person is exposed to. A baby or fetus exposed to high levels of PCBs may have lifelong learning and behavioral problems. PCBs may also affect the immune and reproductive systems, thyroid hormones, and cause cancer.

Q: What is the basis for the advisories?

The consumption advisory for Pacific lamprey in the Columbia River and its tributaries in Oregon is due to elevated levels of mercury and polychlorinated biphenyls (PCBs) in Pacific lamprey tissue.

Mercury contamination is the result of a number of sources but primarily coal-fired power plants, incinerators, and cement plants. The problem can be compounded by the hydroelectric system, where low oxygen levels behind reservoirs can alter the mercury compound chemically to a form that allows it to accumulate in fish tissue.

PCBs are long-lived pollutants that have entered the environment through use or improper disposal. The chemicals were widely used prior to 1979 as insulating fluids for electric transformers, capacitors, and electric motors. PCB production was banned in the U.S. in 1979, yet fish across the country are still contaminated by PCBs because they are very stable compounds that do not decompose and are easily incorporated into fish tissues, which tend to accumulate along the food chain.

Q: How did the mercury and PCBs get into Columbia River fish?

Once mercury and PCBs get into the water, they get consumed by bacteria, insects, and other small organisms that fish eat. When fish eat these organisms, the contaminants are absorbed into the fish’s flesh and fat rather than passing out of the fish as waste. Over time, the amount builds up to toxic levels. The bigger and older a fish is, the more likely it is to have eaten lots of smaller, contaminated organisms. Since lamprey feed off those larger and older fish, they are exposed to a much higher concentration of contaminants.

Both mercury and PCBs substances are found in Columbia River Basin rivers and have washed into the Pacific Ocean. Since almost all the growth of Pacific lamprey happens in the ocean and adult lamprey stop feeding when returning upriver to spawn, scientists believe the mercury and PCBs came from the ocean and not a specific river.

Q: Have tribal staff reviewed the findings and the advisories?

Yes, CRITFC water quality staff and some tribal staff have reviewed the data and its findings and they appear to be sound.

Q: How were the advisories reached?

Adult Pacific lamprey for the analysis were collected in 2009 from the Willamette River at Willamette Falls directly downstream from the locks (n = 12); Columbia River at the John Day Dam lamprey collection box near the exit to the John Day pool (n = 16); and Deschutes River at Sherars Falls fish ladder (n = 5). The samples were analyzed in 2011 by the Oregon Department of Environmental Quality (DEQ) lab and the United States Geological Survey (USGS). In 2012, CRITFC submitted the data to Oregon Health Authority (OHA) for review. OHA determined an advisory was not necessary based on the review methodology in place at that time. Since that time, OHA made changes to the standard operating guidance (SOG’s) used to calculate meal recommendations from fish tissue data. Due to these changes, OHA re analyzed that data in 2021 and has determined that an advisory with meal recommendations for lamprey is necessary. The changes included considering the cumulative effects of multiple contaminants with similar health effects, such as mercury and PCBs and developing different levels for distinguishing harmful levels from exposure of sensitive populations (children, pregnant people) as compared to general populations. They then began notifying the tribes once this advisory appeared necessary.

Q: What are the tribes doing to address this?