Portland, Oregon – The Columbia River treaty tribes–the Warm Springs, Umatilla, Yakama, and Nez Perce–are excited to announce the opening of the summer commercial fishery and direct-to-public sales. The commercial sales of fresh, locally caught summer chinook, sockeye and steelhead opened at 6 a.m. today, June 18, and will run until further notice.
“The exciting thing about this tribal fishery is the number of sockeye that will be available to the public,” said Paul Lumley, executive director of the Columbia River Inter-Tribal Fish Commission (CRITFC). “We are seeing record returns of sockeye to the Columbia River Basin and the tribes are able to provide this top-quality product while they support their families and local economies.”

The Columbia River Basin is experiencing record returns of sockeye with 15,633 crossing Bonneville Dam yesterday. Yesterday’s record return combined with the current forecast of approximately 460,000 sockeye should make for the largest return since 1938 when Bonneville Dam was constructed. Tribal fishers expect to harvest just over 32,000 sockeye. Valued for personal use, many will be taken home by Indian fishers while most will be sold commercially. The majority of returning sockeye are destined for the Okanagan River and upper Columbia while smaller numbers will return to the Wenatchee River. Passage improvements and tribal reintroduction programs on the Yakima and Deschutes rivers should yield higher returns. While Snake River sockeye remain listed under the Endangered Species Act, their numbers are increasing and comprise a very small portion of the tribal harvest. 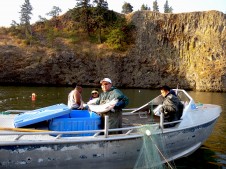 Indian fishers along the Columbia River check their nets for salmon.

Historically called “June Hogs” due to their large size, summer chinook are not listed under the Endangered Species Act. The current forecast of 91,200 summer chinook will allow Indian fishers to harvest approximately 27,000 summer chinook, most of which will be sold commercially. Tribal fishers may be found selling fish at various locations along the Columbia River including Marine Park at Cascade Locks, Lone Pine at The Dalles, and the boat launch near Roosevelt, Washington.

The tribal fishery is protected under 1855 treaties with the federal government in which the Yakama, Warm Springs, Umatilla, and Nez Perce tribes reserved the right to fish at all usual and accustomed fishing places in the Columbia River basin. This treaty right encompasses ceremonial, subsistence, and commercial uses.

Call CRITFC’s salmon marketing program at (888) 289-1855 or visit https://critfc.org/harvest for more information. Price is determined at the point of sale and most sales are cash only.