The Mark-Recapture Full Likelihood Model was developed in response to questions of fisheries managers regarding how to properly process mark-recapture data obtained in studies conducted annually to estimate the abundance of mature kokanee (Oncorhynchus nerka) that migrate from Lake Billy Chinook into the Metolius River, Oregon. A sample of kokanee is captured prior to their spawning run and tagged with one or two plastic anchor tags, and fish with and without tags are enumerated a few weeks later during spawning ground surveys. The ratio of resighted double-tagged fish that retained both or only one tag is used to estimate the rate of tag loss, and this estimate is used to correct for the number of fish originally single-tagged. However, there is no way to incorporate the uncertainty in this tag loss estimate into standard Petersen estimators, and have that additional uncertainty expressed in the resulting estimate of population abundance and its variance.

In response, Hyun et al. (2012) developed a full likelihood model (aka MRmix) that provides robust estimates of tag loss and its uncertainty and integrates these values into the process of estimating population abundance and its variance. The model accepts data for double-tagging involving use of two tags of a type that are identical in structure but differentiable (e.g., by color) from the tag used with single-tagged fish, as well as use of a second tag that is a permanent tag or mark (e.g., a fin clip or opercular punch). For studies in which only single-tagging is performed, an additional likelihood procedure was incorporated into the Model in which the user can specifiy values for tag loss and its variance, e.g., values derived in a prior study, or in the absence of prior information, from “best professional judgment”.

While the Model no longer requires the traditional Petersen mark-recapture assumption that tags are not lost, it does require that the other basic assumptions are not substantially violated: the study involves one tagging and one recapture/resighting event; sampling during both events is random; there is no mortality nor emigration or immigration between events; recapture/resighting probability is not affected by presence of a tag; and loss of one tag in a double-tagged fish is independent of eventual loss of the other tag.

In Step 1 of the Mark-Recapture Full Likelihood Model, the user chooses which study scenario is appropriate: single + double tagging, or single-tagging only. In Step 2, the corresponding field data are entered, along with presumed values for tag loss and its variance for the single-tagging only option. The user then directs the model to run. The output data includes point estimates and standard errors for: abundance (N), probabilities of being captured in the first (p1, tagging) sample and the second (p2, recapture/resight) sample, and tag loss (rho). The output with the associated input data may then be downloaded as a spreadsheet file. 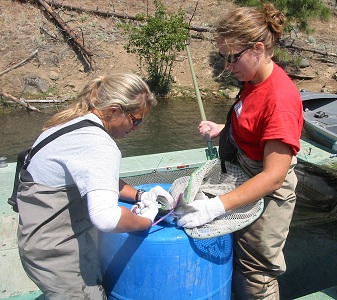 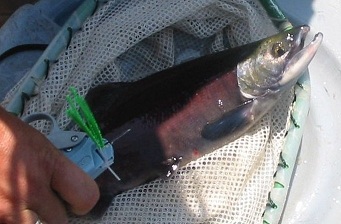