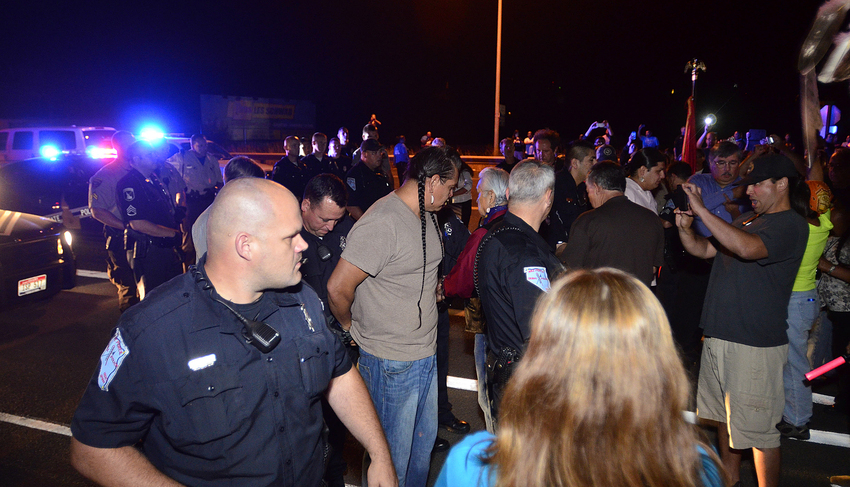 Nez Perce Councilman Brooklyn Baptiste being arrested at a protest blocking a megaload transport as it attempted to enter the Nez Perce Reservation.

People have asked why tribal representatives charged with protecting treaty fishing rights are weighing in on energy policy. The answer is simple: protecting fisheries requires holistic management of both the fish and the ecosystems upon which those fish depend. For 75 years, energy demand has been built on the backs of salmon and the environment that supports them, and the steep decline of salmon, steelhead, and lamprey show the effects of it.

The last thing these fish need are more obstacles, this time in the form of coal dust and debris, threats from spillage or accidents, or the environmental effects of burning of tar sand oil—a particularly dirty form of petroleum. In addition to the threats to the ecosystem, both of these proposals would negatively impact tribal fishers’ access to treaty-reserved fishing locations with mile-long trains or increase barge traffic on an already congested Columbia River.

The Nez Perce Tribal Executive Committee felt so strongly about the issue of transporting megaloads through their reservation that they protested the most recent shipment and eight of the nine council members were arrested.

These are only two of the many threats to the health of the river, the fish, and the fishery upon which the tribes depend. It is a sad fact that many people don’t understand the scope of these threats. Tribal wisdom teaches us that what harms one part of the web of life harms the whole, including ourselves. Only by remaining diligent in protecting the fish and the waters in which they live do we have hope of ensuring that the seventh generation from now will enjoy the bounty that we do.