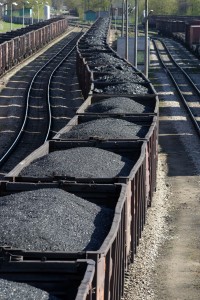 Coal trains can be 1 to 1-1/2 miles long, releasing dust and debris and severing communities through with the rail lines pass.

For thousands of years, people have lived, worked and prayed along the Columbia River. The great river of the Northwest shapes the cultures of those who rely on its bounty. The river has experienced many changes in the past 200 years: overfishing, hydropower development, population pressures, and pollutants. Today, the river is threatened by a wave of proposals to turn the railroads lining the river, as well as the river itself, into a major transportation corridor for fossil fuels. These proposals, should they be put into practice, would risk the health, safety, and economic security of those living along the river. Tribal members fishing in the Columbia face even larger risks and potential impacts since they spend significant time outside exposed to the air and water in and along the river and eating a diet heavy in fish caught there.

The tribe’s opposition stems not only to the climate effects of continued fossil fuel use, but also the present danger of transportation risks. Continued reliance on fossil fuels would have long-lasting, harmful impacts to the environment and the natural resources upon which tribal cultures are based. This alone is reason enough for opposition to expanding fossil fuel transport through the region, but adding in the risk of catastrophic environmental damage from spills and derailments and the correct course of action is even more obvious.

On both sides of the Columbia River Gorge, rail lines follow the river, with some stretches running on causeways mere feet from the river on both sides of the track. Traffic this close to the river almost guarantees that accidents and spillage issues will either enter the water or affect it. 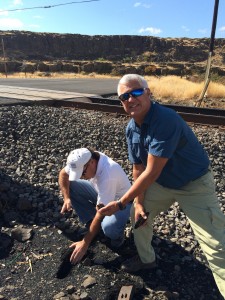 Chip Smith (right), Assistant for Environment, Tribal and Regulatory Affairs, Office of Assistant Secretary for Army Civil Works; and JR Inglis, Corps of Engineers Tribal Liaison, Portland District, dig down to find the depth of the coal debris along the tracks near Dallesport, WA. In some places, they found debris 4 to 6 inches deep.

For the rail transport of coal, the major risk is the amount of dust and debris that comes off the cargo during transit. Coal is transported in open rail cars that are exposed to the elements. The loaded cars are sprayed with a substance in an attempt to control dust, but settling and jostling of the coal during transit reduces its effectiveness. Coal dust and debris pollutes the air, water, and land all along the Columbia River. Some trains can have more than one hundred coal cars, each adding coal dust and debris to the environment the train travels through. Under windy conditions, black clouds of coal dust have been witnessed coming off these cars, blowing into the environment or the river. Airborne coal dust can be especially harmful to humans when inhaled. Tribal fishers and others who work along the river are at particular risk to breathing in unsafe amounts of coal dust particulates. This scattering of coal into the environment happens in the course of normal transport, not just during a derailment or other accident. 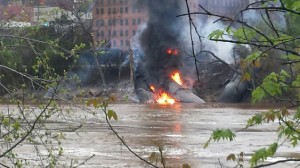 An oil train derailment into the James River in Lynchburg, Virginia. Photo by Waterkeeper Alliance.

For the rail transport of oil, the primary risk is from derailment and oil spillage into or along the Columbia River. Derailments or oil spills in this sensitive corridor would devastate the Columbia River ecosystem and the treaty fishery. Even with a multi-million dollar, full-scale emergency response using the latest containment methods, a major spill could potentially pollute the area for many years. 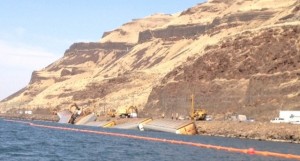 A 2014 derailment near Wallula in Oregon. With tracks built this close to the river, any problem will likely impact the water. Fortunately this train consisted of empty cattle cars. Photo from the Union Bulletin.

Sightline Daily, a Northwest news source, reported that the Northwest averaged nine freight train derailments per month over one 31-month period they reviewed. Trains transporting Bakken oil out of Montana, North Dakota, and Saskatchewan have derailed across North America with alarming frequency, each causing spectacular—and deadly—results. Tribal and local communities are further vulnerable with evidence that companies shipping coal and oil are vastly under-insured leaving local populations with the responsibility of cleaning up spills. Some states have set aside special emergency funds to pay for these clean-ups. For example, New York State set aside $40 million, and there are calls to increase it to $100 million, given the costly nature of cleaning up a large spill.

The impacts of increased fossil fuel transport aren’t limited to risks from a possible accident. This transport will impact the sensitive Columbia River ecosystem even if every train runs without any problems. The increases in rail transport will require expansion of rail lines, which means more fill in the river, shorelines, wetlands, and streams, along with further displacement of tribal fishers and impact to the ecosystem and natural resources.

Increased rail traffic also equates to more risk of train-strike. Tribal fishers are particularly at risk, as they regularly cross railroad tracks when accessing their fishing sites. Most of the access roads to the Columbia River are rural crossings without lights or crossing bars. This combination of tribal members regularly using uncontrolled crossings and a sharp increase in railroad traffic greatly increases the likelihood of deadly train-strikes. 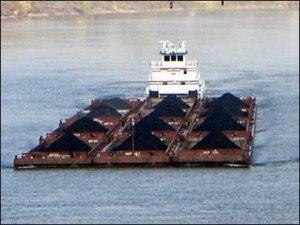 A barge transporting coal on a river.

Fossil fuels transported by barge carries its own risks and impacts, not only to the environment, but to tribal treaty fishing activities as well. Increased barge traffic impedes tribal fishing efforts and the construction of more boat docks and loading terminals could impact or even eliminate treaty fishing sites. In the lower river, the large ships that are proposed to carry the fossil fuels will further damage valuable habitat and cause problems such as wake stranding for adults and out-migrating salmonid smolts. Increasing the already large amount of barge traffic through the Columbia River estuary will only make this situation worse.

Fossil Fuel Use Impacts on the Columbia Basin Ecosystem

Even if the coal that passes through the Columbia River basin travels safely and without incident, it still has the power to impact or harm the region’s ecosystem. Most of the coal shipped from the Pacific Northwest travels to Asia, where it is burned, emitting mercury and other airborne pollutants into the winds that head east, eventually reaching the Columbia River Basin. The full extent of this impact has yet to be studied. 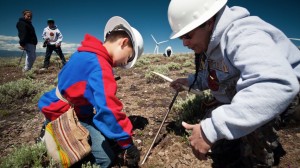 The tribes’ opposition to fossil fuel transport through the region doesn’t mean they are opposed to or ignorant of the region’s energy needs. In 2003, the tribes authored their Tribal Energy Vision, a plan that proposes sustainable energy development goals that would not burden natural resources. A fundamental goal of the Tribal Energy Vision is to reduce the pressure of energy demand on Columbia Basin fish and wildlife resources. In other words, the tribal goal is to take energy policy off the backs of salmon and the environment that supports them.

Our entire region is defined by the Columbia River, and its protection should be on the forefront of our thoughts and actions. Opposing threats such as fossil fuel transport is a significant and important piece of that goal.