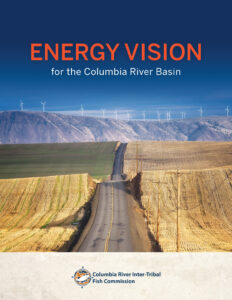 Click to visit the Energy Vision page with links to download the complete report or the executive summary.

The Columbia River Inter-Tribal Fish Commission has released the 2022 Update of the Tribal Energy Vision for the Columbia River Basin. This Energy Vision was developed to ensure that the energy transition taking place to combat climate change is done in a way that also protects already imperiled Columbia Basin salmon and steelhead populations.

“Renewable resources will play a larger role in meeting future electricity needs in the region,” said CRITFC executive director Aja DeCoteau. “Under the right conditions they will reduce greenhouse gases and benefit Columbia River salmon, but without proper integration and siting, they will harm fish and other tribal resources.”

The goals for the new Energy Vision are:

The original 2003 Energy Vision was produced after energy shortages prioritized electricity generation over fish and wildlife protection measures, which had a significant negative impact on salmon survival.

The updated Energy Vision has been in development for nearly two years. It expands the scope of the original into a comprehensive and holistic plan to deal with both the changing energy environment and the changing climate.

“We must address climate change to protect salmon and the environment that sustains us, but if we don’t have a plan, hasty energy transition decisions could make things worse for Columbia River salmon and other tribal resources,” said CRITFC Chair Ron Suppah (Warm Springs). “The Tribal Energy Vision provides a blueprint on how to make sure energy production and the energy transition aren’t built on the backs of salmon.”

“CRITFC and its member tribes are committed to working with other regional interests to lead the region to a brighter and healthier future,” said DeCoteau. “Affordable and reliable power is important to all the region’s families and businesses, both tribal and non-tribal. The true wealth of our region begins with the health of our rivers, fish, and the ecosystem they support, which is our shared culture, history, and future.”

The new Energy Vision was reviewed by over 30 specialists from state and federal agencies, legal and environmental organizations, and power production agencies representing fields including economics, energy production, public utilities, law, and environmental protection. Below are some of the comments received:

“The Commission’s updated Energy Vision provides a useful framework for thinking about how Oregon decisions will affect the Columbia River Basin and its inhabitants,” said Oregon Department of Energy Director Janine Benner. “Many of the Vision’s recommendations – from focusing on thoughtful new renewable energy development to reducing dependence on fossil fuels to enhancing demand response and energy storage – align with the Oregon Department of Energy’s mission to balance energy needs and impacts in our state.”

“I have followed some of the deliberations and work that have gone into the NPPC’s draft 2021 Power Plan and believe the CRITFC [Energy Vision] provides a more sensible approach to the region’s electricity needs than does the NPPC draft,” said Roy Hemmingway, founding member of the Northwest Power and Conservation Council.

Visit the Tribal Energy Vision page https://critfc.org/energy-vision/ on the CRITFC website for more detailed information and to download the complete report.